‘Health and service provision for people with Autism Spectrum Disorder ASD – A survey of parents in the United Kingdom, 2014’

This report highlights the scale of the challenges faced by parents and children with ASD both in relation to the behaviours and health problems encountered but also in relation to accessing adequate services for support. The survey data indicated that a minority of respondents were struggling to access services from the NHS for basic support with challenges such as diet, nutrition, gut problems and sleep difficulties. In addition, even those who had managed to access the professional services available did not have their problems resolved.

Only a minority of responders felt that the NHS professionals they encountered understood their concerns about the behaviour and healthcare issues of their child, and the majority (70%) felt that their child’s symptoms were attributed to ASD, rather than being worthy of investigation with the potential for treatment. Indeed, having a label of autism seemed to get in the way of accessing services and potential treatments that would ordinarily be available on the NHS.

This diagnostic overshadowing meant that children’s symptoms were often left untreated and when parents sought help privately, they were often able to get at least some of these problems resolved.

This document can be shared by copying the following link: https://www.thinkingautism.org.uk/taking-action/resources-and-publications/health-and-service-provision-for-people-with-autism/
Write to us to obtain FREE printed copies of the document for wider distribution. 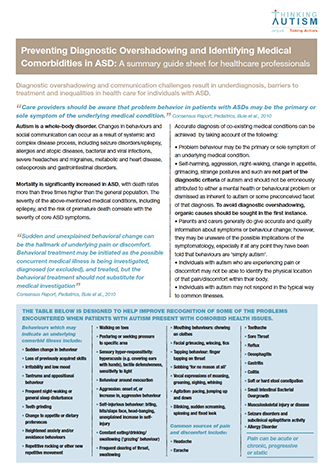